Article updated by Molly on July 13th, 2022 / The Kuppett garbage disposal isn't currently available so we've made a note of that and left it up for reference. We'll look for a replacement for future updates. 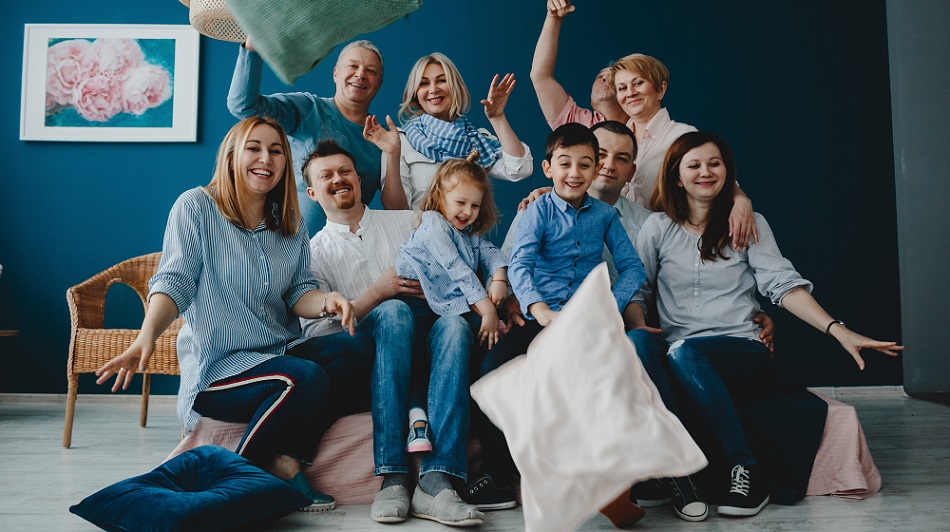 The number of people in your family is one of the measuring sticks that can be used to decide how strong a household garbage disposal should be. This is measured by the disposal's motor strength in horsepower which - in garbage disposals - will usually range between 1/2 and 2 HP.

If you have a large family, the recommendation is that you have a more powerful garbage disposal because it will be more heavily used.

Large families tend to eat at home more often (it's usually cheaper) and they make more food waste in the process. Stronger garbage disposals are more effective at handling the increased workload.

In this article I'm going to cover some of the higher HP garbage disposals that I'd recommend for large families.

What constitutes a large family?

My wife and I have four kids, three of which are in school most of the day. This is right on the cusp of what I'd consider high-volume kitchen use, since we typically eat two of the day's three meals at home. As such, I'm understanding a "large" family to mean six or more people in a single household. 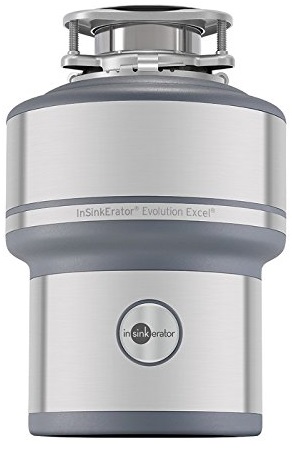 The InSinkErator Evolution Excel is one of the most powerful residential garbage disposals on the market, sitting at 1 HP and three grinding stages. This means it's capable of handling a lot of heavy food waste without clogging or having any kind of operational issues. In addition to being powerful, it's also extremely quiet, running without the noise and growl of cheaper units.

The only downside here is that all this muscle and sound-proofing technology costs you. Getting the Excel for around the $300 mark is pretty typical.

Yet, for large families it's well worth the investment.

Even for families with up to eight or 10 people, this unit can handle just about anything you can throw at it, though we'd still recommend avoiding bones and fruit pits. 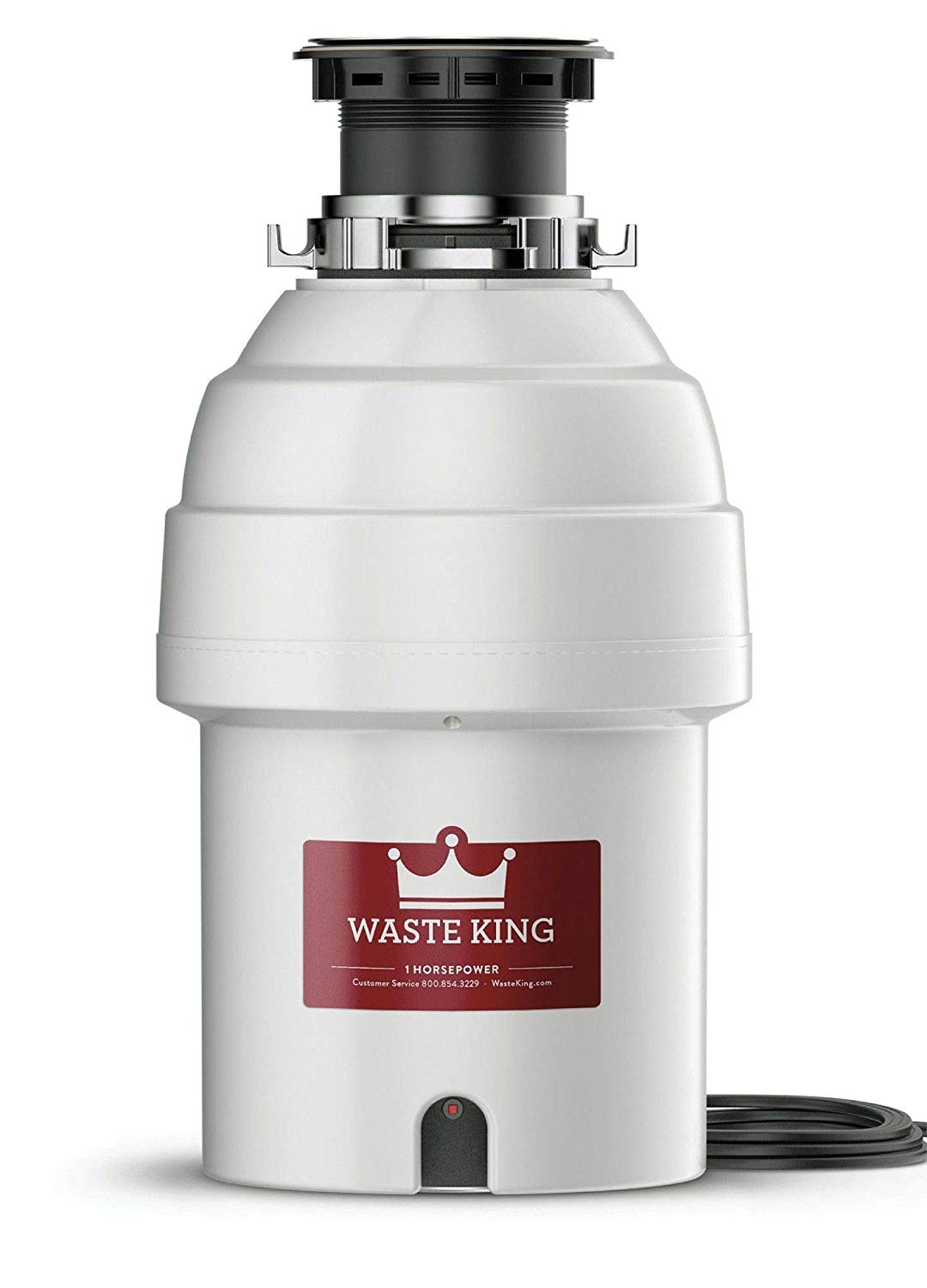 The main advantage the Waste King L-8000 has over the comparable Kuppett disposal (highlighted below) is ease of installation. The L-8000 is very easy to install and just uses a simple electrical switch to turn on and off, which is more straightforward than the Kuppett's air switch technology (more on that later).

It's cheaper than the Evolution Excel with only has one grinding stage. Still, at 1 HP, it's powerful enough to handle the food waste levels that large families are capable of.

While stronger and more durable than the Kuppett, the L-8000 isn't nearly as quiet as the Evolution Excel and even a bit noisier than the Kuppett at a similar price point.

We like the L-8000 because of Waste King's brand recognition and based on our own experience (we've owned a couple of these). 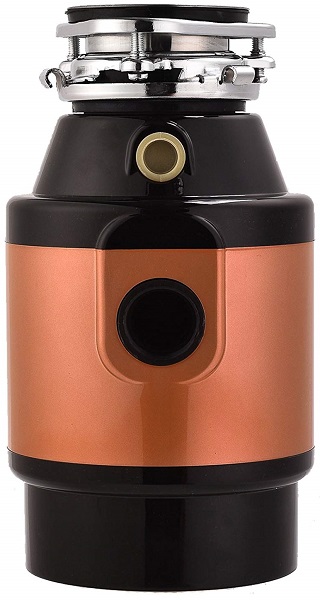 Though the Kuppet doesn't have the three grinding stages that you get with the Evolution Excel, it does have a more powerful motor at 1.5 HP and a much cheaper price tag. Like the Excel you still get the quiet operation (though it's not as quiet as the Excel). It's also a fast-grinding motor at 3600 RPMs, one of the highest RPM ratings we've seen.

The downside to a cheaper price tag is cheaper parts, and an air switch that you have to install on top of your counter. You get a lot of plastic parts that just feel weaker and an overall more complex setup routine that you don't have to worry about with the InSinkErator or Waste King options.

Still, the Kuppet gives you the strength required for a high-volume of food waste from a large family home.

Features the Best Garbage Disposals for Large Families Have

As we've already established, the best garbage disposals for large families and households should have a high HP rating. In the garbage disposal world, anything 1 HP or above would be considered high. As a result, we'd recommend always checking that number first and avoid garbage disposals under 1 HP. Bonus features would include multiple grinding stages and silencing technology.

For larger families (six household members and up) look for a garbage disposal with at least a 1 HP motor rating.

Having additional grinding stages can be helpful, especially if you're dealing with higher volumes of food waste.

While this feature isn't crucial, it's becoming a more sought-after aspect of garbage disposals since the added noise of a garbage disposal can be especially annoying and chaotic. This is only amplified in homes with a large number of people.

How much food waste do large families typically make?

In the United States, the average person creates about one pound of food waste per day, where about 40 percent of that waste is fruits and/or vegetables. This means that in a family of seven, you'd be looking at roughly six to eight pounds of food waste per day going into your garbage disposal.

It should also be noted that food waste will be increased if your family often cooks at home, as I've already alluded to. While this option is almost always cheaper, it's harder on your garbage disposal as this often involves preparing your own meat and throwing the fatty scraps into your disposal unit. As a result of prepping your own meal, you'll end up throwing a lot more food away that you otherwise wouldn't.

Again, this is harder on your system and can be alleviated by a stronger garbage disposal unit.

If none of the four disposal units I've highlighted here work for you, just start with 1 HP and then set a budget for yourself. For those wanting to avoid going over $200, the shopping process becomes a lot easier as it limits your choices automatically. As long as you have that powerful motor, all additional features are going to be mostly bonus material.